A look back at Halloween Horror Nights 2019

It’s an event which churns stomachs, turns heads, and has every Universal fan bouncing.

The event picked up where it left off last year, with the entire experience paying homage to the 1980s. When Universal announced that Stranger Things, Ghostbusters, Yeti, and Us, were returning for 2019, the excitement began to boil.

The development of HHN is part down to Universal’s acquisition of larger-name intellectual properties, which started with The Walking Dead in 2012, and has continued with Ghostbusters and Stranger Things in more recent years. The breadth and depth of the line-up for Halloween Horror Nights never ceases to amaze us, I mean, where else would you find the utterly terrifying, humorously theatrical, intensely disturbing, and a mix of all three all in one place?

As mentioned, the line-up for Halloween Horror Nights is always impressive. But I think you’d all agree, take away the haunted houses and it’s a different prospect entirely.

For 2019, the same IP houses returned, with Ghostbusters, Stranger Things, House of 1000 Corpses, and Killer Klowns from Outer Space all there. The original content mazes were there too, including; Depths of Fear, Graveyard Games, and Yeti Terror of the Yukon, alongside a debut for Jordan Peele’s blockbuster hit, Us. 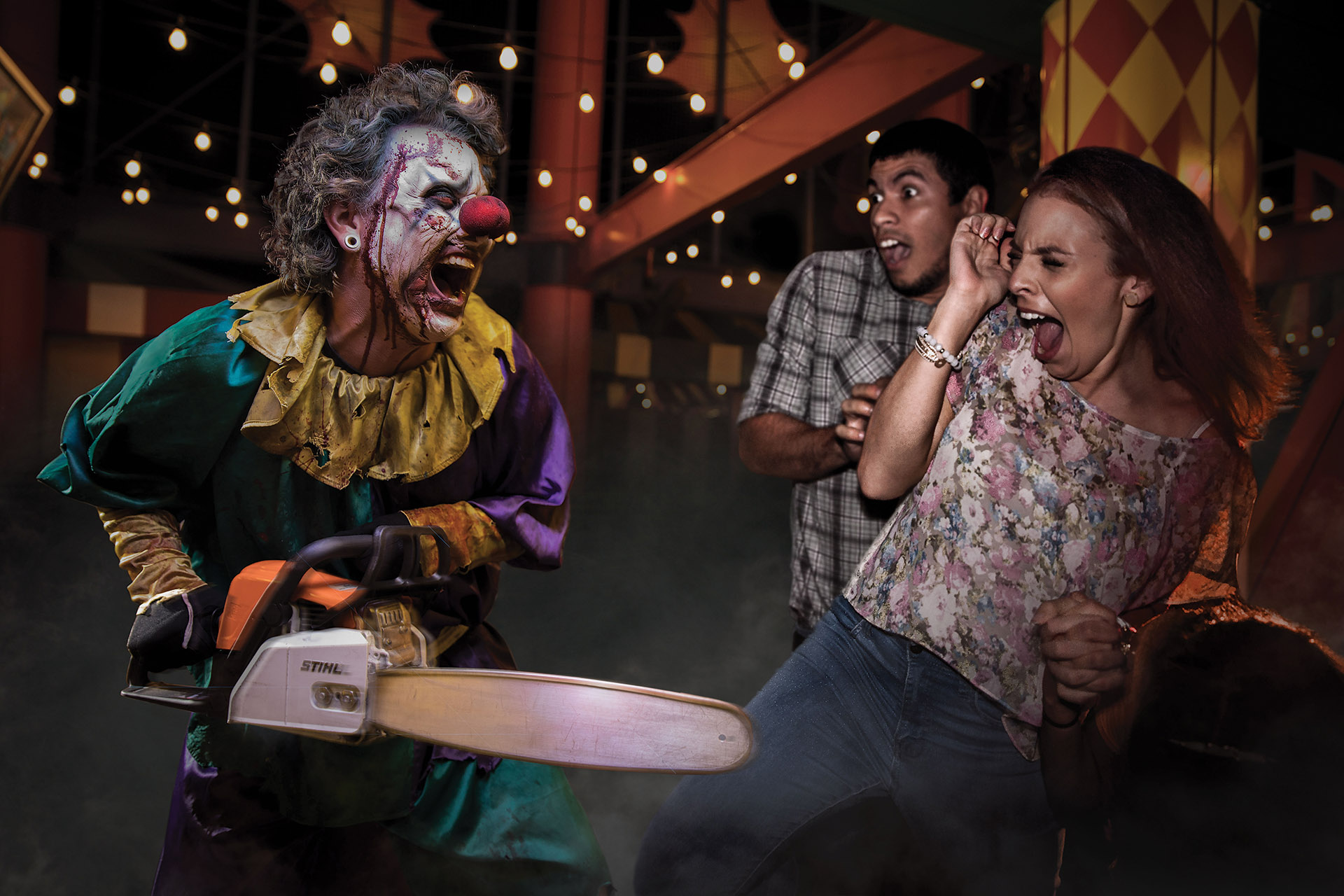 Each iconic maze creates a sense of surrealism that you desperately want to escape, and though they aren’t scary enough to make you run-a-mile, or quite as disturbing as the famous chase scene from The Shining, they combine gore, chilling music, interactive elements and of course – killer clowns!

But why are they so great?

The first great thing about the haunted houses is that they are in the back-lot production studios at Universal – the actual studios of Universal. Each house varies in length, size and scares, some will make you jump; some will make you scream; others make you feel sick to your stomach. It’s all about what you prefer. But one thing’s for sure, they all offer graphic, true to life recreations and familiar imagery from the properties that inspire them.

Attention to detail is seriously impressive too, with as much thought given to the outside as what you experience inside. When you step inside, each house (especially Depths of Fear) creates an illusion. Whether it be through the set design, lighting, music or characters, an intense, heart-pumping journey puts you in a very real world and a lot like the movies.

In fact, with all the top productions returning and the new additions living up to their name, this year was the hardest to rank in terms of the best horror house.

To help us decide, we called an expert.

As a keen vlogger and someone who knows the event extremely well, we were eager to get the thoughts of "@thatfloridaguy1" and share some of his work.

Here’s what he had to say when we asked him about his top three haunted houses of 2019.

“My favourite house this year was Graveyard Games. I always find Universals original mazes rank higher on my lists than IP houses. This house had the perfect mix of scares, storytelling and set design. There was one room inside the house which plunged you into perfect darkness and instead of in-your-face scares, they turned to sound design to make you feel uncomfortable, playing panned sound effects simulating someone was with you.”

“My second favourite was a surprise to me, and that’s Houses of 1000 Corpses. Yes, it was one of Universals IP houses, however, I hated the movie. I watched the movie before our trip out to Universal Studios and did not enjoy it at all, however, the house terrified me. The interesting thing about this house is that although it’s classed as intellectual property, the movie is based on an original house Rob Zombie designed for universal Hollywood. Each time I ran through this house I got 2-3 great scares! It was dark, narrow and loud! The perfect recipe for a great house, and why it secures second place.”

“My third favourite house was Ghostbusters. Though the house wasn’t scary, the set designs were huge, and the effects were perfect, making you feel tiny and a lot like you were walking through the movie. And to top it all off, they paired it with the famous Ghostbusters music.”

Aside from making your way through haunted houses and the HHN fog – a dark, somewhat transcendental vibe with eerie lighting and pounding music of each scare zone welcomes you. And now is the time to lose yourself during spine-chilling performances surrounded by freaks. 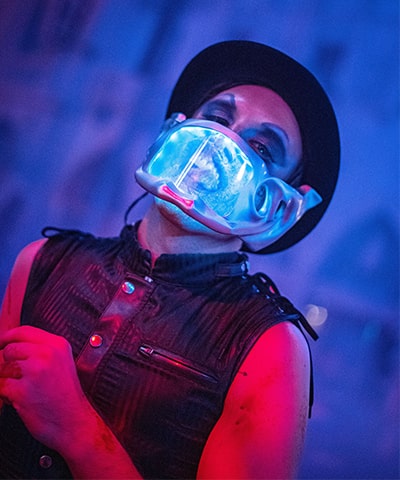 It’s here where you’ll meet your worst nightmare, as you’re placed in the middle of blood-thirsty zombies, otherworldly beings and brutal maniacs ready and waiting to startle you. If you’re aware of your surroundings, don’t expect to jump out of your skin – that’s kept for the horror houses. But with the elaborate structures and moody settings, each zone brings such a primal energy that you completely forget this is a family-friendly theme park during the day.

Could this be why Halloween Horror Nights is an 11-time winner of Amusement Today’s “Best Halloween Event” Golden Ticket Award?

Hold that thought while we look at “That Florida Guy’s” favourite scare zone. 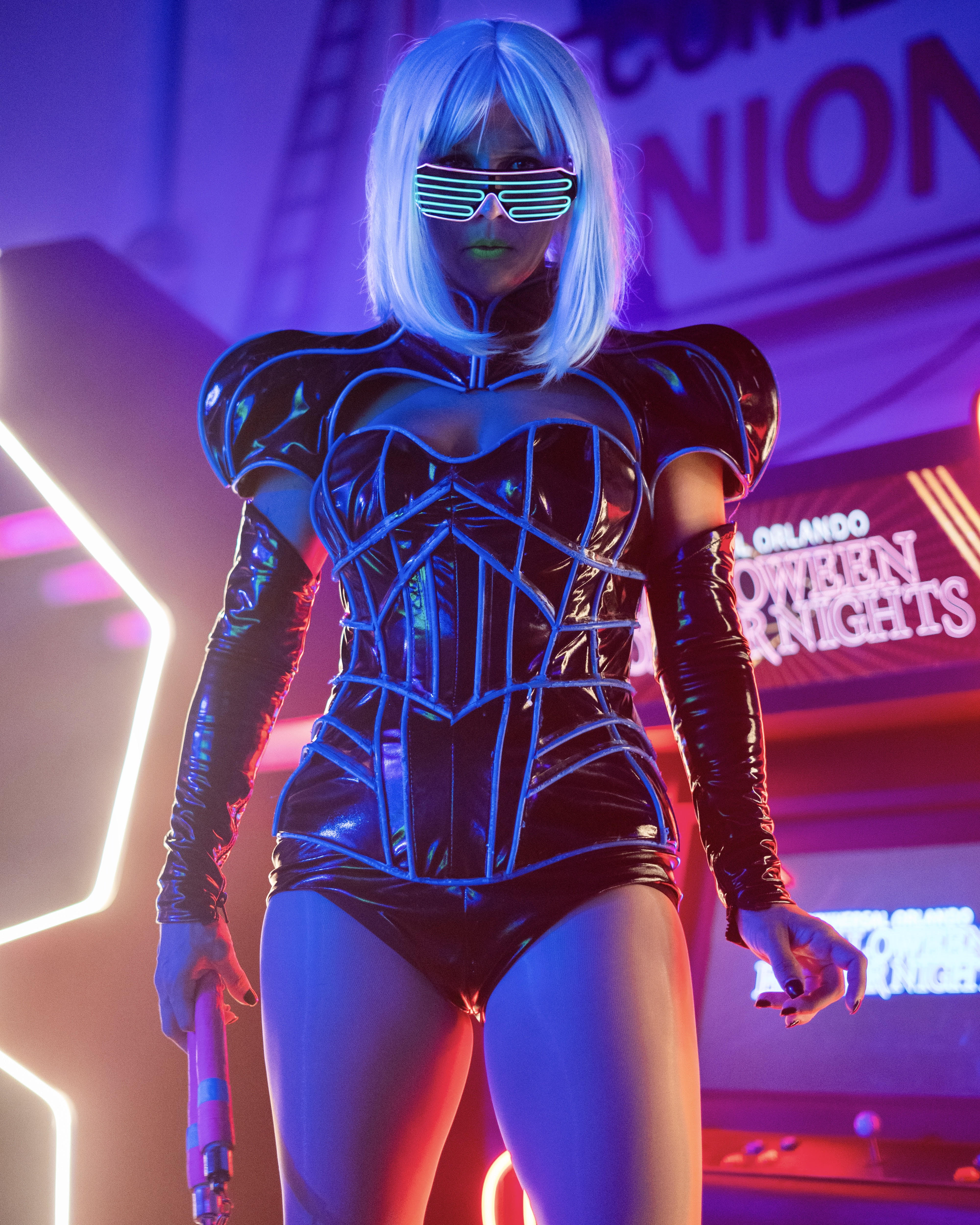 Anarch-cade – photo by That Florida Guy

“My favourite scare zone this year was Anarch-cade. Filled with neon lights, fog, and bright costumes, it was a photographer’s dream. I spent a lot of time in this zone taking photos and shooting video! There were people in dark outfits with neon masks running around with chainsaws – and yep – real chainsaws. You’ll also find girls in Neon costumes walking around on stilts, which makes for awesome photos. The set itself is 80s inspired, with huge arcade machines decked in neon lights, and retro graphics with huge letters spanned across saying “game over”.”

And what about the food?

Halloween Horror Nights has a history for mixing food and drink with its scares. And once you survive the haunted houses and maniacs with chainsaws, you’ll certainly have an appetite for something sweet, savoury or wet.

Luckily, there are tons of tents, bars and stalls, where you can find a whole host of exciting dishes (exclusive to HHN), at specifically erected locations throughout the park. There’s no shortage of places to eat, but with each one offering something totally different, it’s wise to have your eye (or tummy) on one of them specifically beforehand.

To give you a flavour of what’s on offer, here’s what “That Florida Guy” enjoyed at this year’s event.

“Stranger things was back at Halloween Horror Nights for its second year running, and a lot of the food was featured around this. One of my highlights was Imperial Panda inside the Startcourt Mall – a venue which featured heavily in season 3. If you enjoy Chinese food, I recommend the Bento Box served with orange chicken bao bun, Szechuan beef pot stickers, fried wonton chips, and ginger soy dipping sauce. It’s a good-sized serving and tastes good. They also have Stranger Things mini pumpkin doughnuts on a dirt (cookie) base with green icing drizzle, giving the look of the pumpkin patch from season 2 of the show.”

Stepping off the Stranger Things wagon, another great snack is Twister Tasters. It’s a potato spiral placed on a stick with flavourings, such as sour cream and onion, or salt and vinegar drizzled on top. Love them or hate them, they remind you of Halloween Horror Nights.

Pizza fries. The part you’ve all been waiting for

Halloween Horror Nights wouldn’t be complete without pizza fries. After debuting a couple of years ago, they instantly became a fan favourite – crinkle-cut fries topped with marinara sauce, pepperoni and sausage. But this year saw a new version called “s’ mores” fries which will please the veggies – a killer combination of sweet potato, marshmallows, chocolate chips and chocolate sauce. A heads up, both are available at KidZone Pizza Company.

And to wet the whistle?

In the same way that the houses are at the heart of Halloween Horror Nights attractions, the drinks are at the heart of its culinary line-up. After the houses, and before the food, they are what everyone wants to experience – and often the fuel that propels an otherwise-nervous guest through the night’s events.

Whether alcoholic or non-alcoholic, the choice of drinks is endless, which is somewhat surprising following the controversy in 2017 around Universal’s attempt to tamp down on HHN’s free flow of alcohol. Though for this year, it seems things were back to normal, and on that note, let’s have a look at some of the drinks on offer.

Event drinks are the most exciting of the bunch, and for 2019, there were four of these, each inspired by 80s beverages.

These highly sought-after drinks are available at any of the stalls for $13.99, and to justify the price, you’ll receive a 20-ounce souvenir cup with a cool design. Event drinks are refillable, but unfortunately, not for free. It’ll set you back $9.99 to refill your drink after the first pour.

There’s no denying that these drinks taste great, and the souvenir cups are certainly a nice touch, but if you’re looking to take the edge off with something strong, you’ll be better off with a beer or mixed drink.

It’s also worth mentioning for HHN newbies and collectors, that the limited-quantity souvenir cups will release in stagger fashion, with a new one available each week.

There’s no frozen margaritas or Aperol Selzer Slushy on the menu, but guests can enjoy a choice of two frozen drinks. Well, with trimmings of waffle and toasted marshmallows, they are borderline desserts. But nonetheless, they are delicious!

You can get both speciality frozen drinks from the Gramercy Popcorn stand and Production Central Veranda – a take-out window of Café La Bamba – for $4.99. Similar in size to a Starbucks Grande Frappuccino, both frozen drinks are great value for money and 100% delicious.

That concludes our look back at Halloween Horror Nights 2019, and we hope that you’ve taken something from this post to make your future trip to the event less overwhelming, or more overwhelming for that matter.

Keep your eyes peeled, as we’ll update our guides and social media with more information on Halloween Horror Nights 2020 as and when the news is out. The event will run from September 10th ‘til October 31st, 2020. In the meantime, be sure to follow @thatfloridaguy1 on Twitter for all the build-up.