Universal Orlando Resort is split into two parks; Universal Studios and Universal’s Islands of Adventure. Each of these parks contains a Harry Potter theme park which collectively are known as “The Wizarding World of Harry Potter”.

Based on the wizarding village where Harry goes to school, the Hogsmeade area opened in June 2010.

The 2nd phase of The Wizarding World of Harry Potter opened in July 2014, based on the street where the restaurants and shops are located in Harry’s wizarding world.

With the addition of Diagon Alley also came the Hogwarts Express – a real train ride that takes you between the two parks!

So let me tell you about the Harry Potter rides in this fabulous wizarding world!

Harry Potter and the Escape from Gringotts (Diagon Alley) This is an indoor rollercoaster with incredibly realistic 3D graphics – and the whole immersive experience of this ride begins even before you board the coaster!

As you emerge into Diagon Alley you’ll notice the huge Gringotts Bank building at the far end of the alley, with a huge fire-breathing dragon sitting on top!

Entering the bank, you’re surrounded by ridiculously lifelike animatronic goblins going about their business as you queue for the ride. The whole area really is just like the film, and the stunning crystal chandeliers inside the bank are amazing! You really feel like you are on the journey with Harry and his friends as you’re plunged through the perilous underground vaults of Gringotts Bank.

What I loved about this ride was that it didn’t need the usual upside-down loops and adrenaline to make it scary; it’s so different to a traditional rollercoaster and you have no idea what’s going to happen next – these kinds of rides are definitely the future!

All of the Harry Potter rides have a definite scare-factor; I would give Escape from Gringotts a “Scare Rating” of 7/10. Being in darkness makes the twists and turns and 3D elements coming your way all the more nerve-wracking.

You can hear the screams from this super-scary thriller of a ride as you enter the Hogsmeade area!

This roller coaster consists of two dragons running side by side on different tracks, so you could have a different experience riding each dragon.

The ride starts off nice and slow, adding to the anticipation and then Whoosh – you’re off on a wild ride! My favourite part was the first twist on the red ride, from the slow moving when you turn a corner and start picking up speed!

Even if you’re terrified of rollercoasters – it’s worth it! This is a once-in-a-lifetime experience and it’s over before you know it.

Dragon Challenge is not for the faint-hearted. For me this was the worst on the scare factor – but that also makes it the best! I would definitely give it a 10/10.

This is the most unique ride in the Harry Potter area. You’re strapped into individual seats, but this is not a rollercoaster as we know it!

The ‘robocoaster’ – which uses a special type of seat and technology – pivots, swings and moves around so at times you can be completely on your back but you are not moving up or down on a track in the way a coaster would.

The 3D elements mean that most of the time you feel like you’re flying, floating and sometimes falling! It is another ride that illustrates what the future of rollercoasters might look like.

For me this was around 7/10 in terms of scariness. But the enjoyment factor was a definite 10!

Flight of the Hippogriff (Hogsmeade) This is more of a smaller, family coaster, with cars that are modelled on the Hippogriff itself – a magnificent, mystical creature with the head of an eagle and the body of a horse.

Starting at Hagrid’s hut, you’ll set off on a “training flight”, which takes you swooping and spiralling at an impressive speed. And if you keep a sharp eye, you might even spot a Hippogriff in its nest! Just like in the Harry Potter books and films, this is a real train ride that takes you between the two Wizarding World theme parks.

Although this isn’t strictly a ride, in some ways it’s just as enjoyable as the main theme park rides as it’s such a realistic experience. You’ll pass all kinds of familiar scenery and even see some familiar characters outside the windows!

All of the elements are completely authentic to the films; I couldn’t believe that they even used the same fabric inside the cabins as the train in the films – they used the same company and flew in the fabric for the train seats!

This is no normal train journey – there are some wonderful movie twists as you would expect. My top tip without spoiling the experience is to look to both sides as you travel so as not to miss anything.

The train ride takes about 4 minutes and is well worth waiting for if you even have to queue!

The Harry Potter rides are all excellent and I would definitely recommend to head straight for these magical areas when you visit Universal Orlando!

About the author: Amanda Couzens-Davies 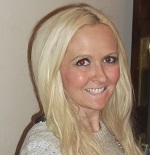 Amanda Couzens-Davies is an experienced marketer, blogger and writer with a genuine love of travelling. You can check out her lifestyle blog at thisluxlife.com
Twitter
Tagged in:  Harry Potter World,Universal Orlando,Wizarding World of Harry Potter