While we all recover from a very snowy battering, we take solace that spring is on the way. For us, this means temperatures go above zero and the cat eats the dandelion clocks. For Walt Disney World, it means the start of their gorgeous spring season. Here’s a couple of things to catch in the next few weeks: 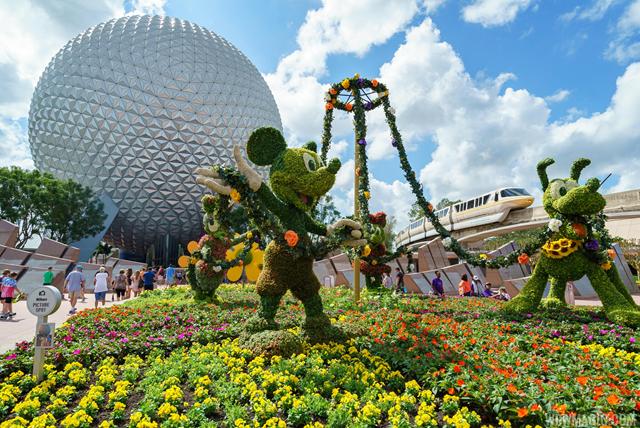 It’s already underway at Epcot, having started at the end of February, and you’ve got until May 28 to check out the Flower & Garden Festival. There is plenty on for the holiday horticulturist, including dozens of Disney-themed topiaries, amazing garden spaces and wildlife habitats and inspirational exhibits and tours. And for those of your with fingers not as green, there’s plenty of outdoor kitchens with snacks and nibbles, an outdoor concert series with some awesome tunes, and plenty more on your walkabouts. Be sure to check it out! Image ©Disney/Lucasfilm, Ltd.
March is the only month in the first four months of 2018 where there isn’t a runDisney event. So whatever weekend you’re turning up in the park, there won’t be a marathon to dodge! If, however, you love a bit of runDisney on your hols, then April 20-22nd are the dates for your diary. It’s a Star Wars themed race weekend, featuring a 5K, a 10K and ending with a 13.1 mile half-marathon! Captain Phasma is leading the charge, so see if you can keep up with im! It wouldn’t be fair to Disney Springs if we talked about spring at Disney and didn’t mention Disney Springs in spring at Disney. For those who have been before, you’ll know it as the themed retail, dining and entertainment centre built to look like one of Florida’s classic waterfront towns. It is home to the World Of Disney store, the largest Disney character store in the world.

Just a little tip to end on: most Florida colleges are on Spring Break between 3-17 March, and Orlando is a popular choice for the party people. Car parks fill up quicker and queues are longer, so turn up to the parks early to avoid disappointment!

Jon is a travel writer based in the sunny, vibrant seaside town of Kidderminster in Worcestershire. He first realised his passion to travel when he realised he lived in Kidderminster.
Tagged in:  disney,disney springs,rundisney,Star Wars,Walt disney world