Thrill rides are not for the faint hearted. This breed of roller coaster encompasses those massive steel structures which loom dizzily over head enticing you to come aboard and make your adrenaline flow. Most will start your heart racing by the sheer magnitude of their size and twisted layouts. Sure to mesmerize even the most daring members of the family, many have small height requirements which will allow for even the younger daredevils to be utterly amazed.

1. The Incredible Hulk Coaster at Universal’s Islands of Adventure The Incredible Hulk Coaster is one incredible ride that causes big screams! This ride is a true inversion monster, turning riders upside down seven sensational times, but only after being launched from 0 – 40 miles an hour in less than 2 seconds. Riders are hurdled out of the launch tube into the first inversion – a zero gravity roll – something sure to make your blood pump even faster. After the “zero g” roll, riders are sent into a cobra roll (2 inversions in 1), followed quickly by one of the largest vertical loops in America. At this point, the ride is only half way finished. Riders will scream with joy as they go under a bridge and through 3 more inversions. This ride is full of quick drops, tight turns, and blistering speeds.

As with the real Incredible Hulk, seeing this monster come to life will make any rider understand why this is truly one of the most thrilling life size monsters in all of America. 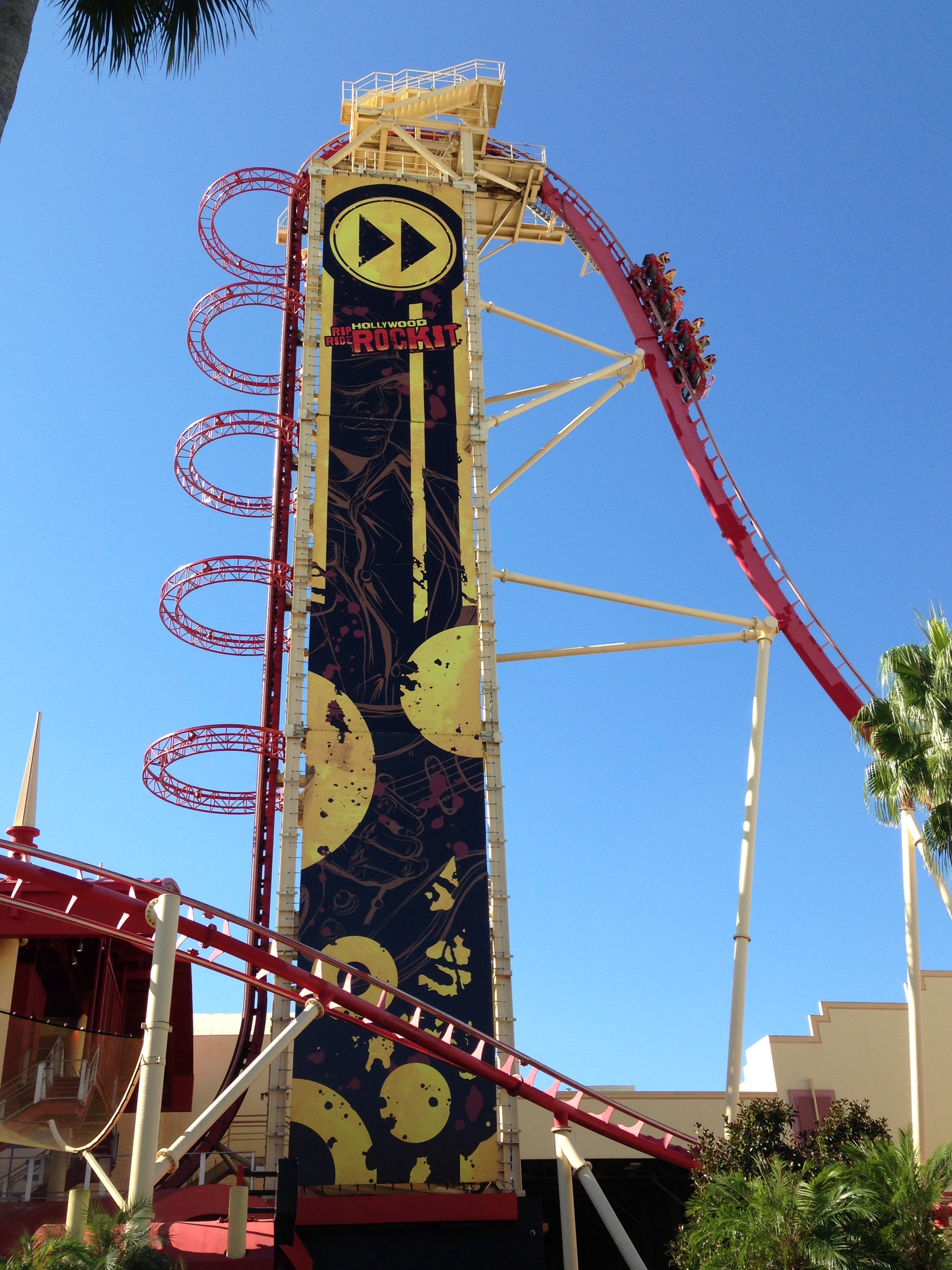 Hollywood Rip Ride Rockit is one of Universal’s newest rides and will have you rocking out to your favourite song! Before you even strap yourself in you need to choose a song to listen to as you experience the first high-tech, customizable, multi-sensory entertainment ride. As you travel along the 3,800foot roller coaster track, the on-board sound system pumps out your chosen song, allowing you to sing along as you experience this adrenaline pumping, music thumping ride. And best of all it’s all being filmed by the cameras on board, so you can take your first out of this world music video home!

Once you have chosen your preferred music and departed the station you will climb its 167ft vertical lift, reaching the top in 16 seconds. Here you will wait with baited breath before it drops 170ft at 65mph into a ‘double take’ loop and unlike modern roller coasters you only have a large padded lap bar to hold onto! You will then twist and turn through several mid-course brake sections before entering a series of swooping curves called the ‘treble clef’. The ride will definitely get you rocking before its final drop and the end of your first music video! Sheikra at Busch Garden’s was America’s first dive coaster. Built in 2005, this ride is meant to give riders the sensation of diving straight down. Named after a mythical bird, Sheikra takes riders up 200 feet in the air, hangs them over the edge for a pulse racing moment, before dropping them at 90 degrees straight down. The hang alone on this ride, will make any thrill seeker question their sanity.

After the sensational dive, riders find themselves racing towards the only inversion in Sheikra. Riders become dizzy with adrenaline as they twist and turn towards a second 90 degree dive, proving that one swooping dive was not enough for this powerful monster of steel. Coming up into a fan turn, the bottom edge of the car enters a small body of water, where a stream of water is shot from behind the train. Anyone choosing to experience Sheikra’s mammoth speed and pulse racing excitement will truly feel the thrilling experience of flight. The Rock ‘n’ Roller Coaster at Disney’s Hollywood Studios blends the thrills of a roller coaster with a true rock and roll experience. As you enter the queue, you are transported to “G-Force” Records where you “meet” Aerosmith in a simulated recording studio. As they leave for a concert, you are asked to be their special guests. The only problem now is how to get there. How about a super fast, super stretched limousine which Aerosmith has arranged for you to use? Once on board you’re ready for launch! 3 – 2 – 1 launch!! You accelerate out of the alley from 0 to 60 miles an hour in less than 4 seconds. The ride of your life is just beginning and some of Aerosmith’s greatest hits are pumped into the limo as you twist and turn on your way to the concert.

This entire ride is in darkness with only scenes of the passing city and landmarks such as the Hollywood sign whizzing past. Believe it or not, this ride to the concert will take you over 2500 feet of track and through 3 thrilling inversions. You’ll get dizzy trying to figure out your next turn and where exactly this insane limousine is taking you. As you hit the brakes at the end of the ride you approach the VIP entrance of the concert venue. You have arrived, ready to enjoy the concert of a lifetime after one limousine ride you will never forget!

Kraken is a true monster of the sea and the coaster at SeaWorld Orlando reflects this in every way. One of Orlando’s tallest, fastest and floorless coasters takes you high into the sky whilst speeding through a series of inverted loops, spins and drops around the SeaWorld Park.

The ride starts with a 114ft drop to the ground below, with only seconds to recover you then enter a 119ft tall vertical loop which will send you spinning. It then climbs again to enter a zero gravity roll and enters a 2 inversion cobra roll, which exits you into a wide sweeping u-turn. Kraken is consistently ranked as one of the top 10 thrill rides and when you experience this spiralling coaster you’ll understand why!

We also have to mention the following not to be missed thrill rides: