6 Reasons to Visit the Florida Everglades

The beautiful Florida Everglades is one of Americas last unexplored wilderness areas. This untouched natural region of tropical wetlands and plentiful wildlife is anything but dull – there are loads of different of ways to experience the Everglades, and a never-ending list of things to do there!

If you want to experience more of Florida than just the theme parks, here are 6 of the best reasons why the Everglades should be high on your list:

If you want to see Florida Gators in their natural habitat, this is THE place to go!

As you can probably imagine, the best way to get close to these formidable chaps is by taking an airboat tour of the Everglades, which gets you right into the swamps to experience the really wild side of Florida!

Fun Fact: The mix of salt and freshwater in the Everglades makes it the only place on Earth where alligators and crocodiles exist side by side.

If you love the outdoors, you’ll absolutely fall in love with the untouched beauty of the Florida Everglades.

As well as loads of nature to watch, the Everglades national park has trails for hikers, as well as guided boat, bicycle and even walking tours.

3. ….But it’s also perfect for a relaxing holiday!

Imagine how it feels to be in the middle of nowhere, miles from civilisation with no signs of human life anywhere around. Sounds like your kind of thing? Then get yourself into the Everglades!

If your idea of a holiday is to relax and get away from it all, it’s the perfect serene setting to escape from the hustle and bustle of the outside world.

…..So if you’ve walked what feels like thousands of miles around Florida’s theme parks, doing some sit-down sightseeing is probably exactly what you need!

A boat tour of the Everglades takes you closer to the wetlands’ incredible natural sights than you could hope for on foot.

An airboat ride in action!

5. It’s a must for animal lovers

Want to see animals and birds you that might not see anywhere else? The Everglades is home to several of the worlds protected species, including the American crocodile, the Florida panther and four types of sea turtles.

This is also one of the few places in the world that you can see manatees in their natural habitat. It’s a natural haven where lazy alligators rest in the sun and turtles sunbathe on lily pads

If you’re into your wildlife, the Everglades is a treasure trove of unexpected surprises – you never know what might happen or what youll see in the swamps!

In 1905, parts of the Everglades were drained to make room for farmland, which led to cities like Miami and Fort Lauderdale sprouting up along the coast. So you could say it’s responsible for creating a lot of the Florida we know today!

To this day, the Everglades is still considered a national treasure just as extraordinary as the Grand Canyon, the Great Lakes or the Redwood Forests.

What’s your favourite thing about the Florida Everglades?

6 Things To Know When You Visit Wild Florida with Kids

The Exhilarating Everglades: Take A Ride On The Wild Side 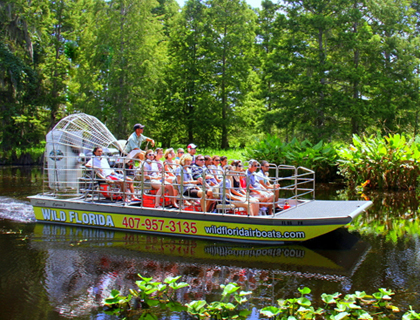