Universal Studios have been very busy this year, opening new attractions and hosting never-before-seen shows for 2012. Their announcement earlier this year showed us what to expect and weve been on the edge of our seats in anticipation ever since. 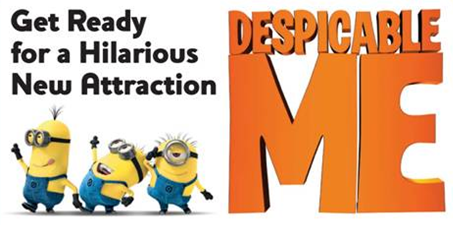 Now we know that another one of their new attractions, Despicable Me: Minion Mayhem is opening on Monday July 2nd. This 3D motion simulator will be based on the 2010 blockbuster animated film Despicable Me and Universal has already invited a few lucky park guests to test out the ride before the grand opening.

Universal stated, “We are excited to share that our Despicable Me Minion Mayhem ride has begun technical rehearsal. We are inviting small groups of guests to experience the ride as a work in progress, while we put finishing touches on the experience.”

At the moment, were not sure of the opening hours, but we do know what to expect from the ride itself. Guests will be recruited to become minions for the evil mastermind Gru and trained by his three adopted daughters on what will be a chaotic and hilarious adventure.

The usual 3D glasses will have to be donned to achieve the full effect and the experience is very much like The Simpsons Ride with the clarity and graphics similar to The Amazing Adventures of Spiderman.

There will be a lot of up and down movement as guests are taken on a journey through Grus mansion and there is even an anti-gravity section where you will feel like youre weightless. As guests exit, they will be greeted with a dance party hosted by a costumed minion and projected onto a large screen along to the tune of Boogie Fever before entering the gift shop.

It all sounds very exciting and we cant wait to try it out for ourselves, but if you find yourself in Universal Studios from July, dont forget to experience it!