With three parks the size of small cities, planning your trip to Universal Orlando Resort is essential – especially when travelling with teens and tweens. Besides knowing what to do and where best to spend your time, there are a few tips and tricks that every parent should know before travelling to Universal Orlando – which I’m guessing you’d love to know too?

All three parks boast a huge variety of attractions and experiences, with thrill rides, shows and journeys to other worlds. But with the sheer size and scale of the parks, it can be hard to know which  to prioritise.

Fortunately, we’re here to help in the way of an informative guide that should give you the tools you need to get the most out of your family trip.

Get a Park-to-Park Ticket

Universal Orlando Resort is epic, with swashbuckling adventures and heart-pumping roller coasters everywhere you look. If you’re visiting with a toddler, a single park ticket will probably be enough. However, for a healthy teenager with increased energy levels, it probably won’t make the grade.

Teenagers will enjoy the freedom a park-to-park ticket gives them, allowing them to effortlessly switch between Universal Studios, Islands of Adventure and Volcano Bay visiting all the attractions in this posts. Parents will benefit from being able to plan longer days in the parks, with less time spent wondering what to do next.

Another perk, especially for Harry Potter fans, is the opportunity to ride the Hogwarts Express and see both Hogsmeade and Diagon Alley in the same day.

Ask any seasoned theme park-goer, and they’ll tell you that Universal is one of the best around when catering to the teenage audience. All three parks, Universal Studios, Islands of Adventure and Volcano Bay offer something unique – with plenty of ways for teens to make their own adventures and explore what they love.

If you’re not familiar with the three Universal parks, we recommend checking out our comparison blog, which goes into detail about the kinds of experiences you’ll find in each of the main parks. Knowing the differences will really help you shape your visit to Universal depending on what your teens are into.

Below we’ve compiled a list of the attractions most consistently ranked highly by teen visitors. These happen to be some of Universal’s most highly rated experiences in general – so you can’t go wrong by giving them a try!

You don’t have to be a fan of Harry Potter to be utterly blown away by the magic of this place. The production value, the attention to detail and the sheer fun you can have here make it a must for any trip to Universal. Of course, if your kids are Potter fans, this is elevated tenfold.

For teenage visitors, the standout experiences are likely to be the rides. For many, Hagrid’s Magical Creatures Motorbike Adventure is one of the best in all of Universal Orlando, with its twisting, turning and manic exploration of the Forbidden Forest. Meanwhile Escape from Gringotts, the multi-dimensional journey through secret underground pathways, is just as highly rated. Make it a priority to try both Potter rides before you leave – you won’t regret it.

If your teens aren’t so much into thrill rides, we recommend trying the famous Butterbeer at the Three Broomsticks (don’t worry, there’s no alcohol in it). We’ve got guides covering both sections of Harry Potter World, Diagon Alley and Hogsmeade, to help you plan the perfect visit. With the explosion in popularity of the Marvel Cinematic Universe, there’s a new wave of teens out there who are hooked on superheroes. Marvel Superhero Island delivers a fantastic experience for the new generation, with opportunities to meet your heroes face to face, take on epic thrill rides, and discover the comic books that introduced the famous Marvel characters to the world.

Our top pick is The Amazing Adventures of Spiderman, a ride which lets you swing over city streets like Spiderman himself. Another great choice – and an underrated experience – is visiting the Comic Book Shop. This is as authentic as it gets, and even if you’re not intent on buying a comic, browsing the excessive collection is enough to make Marvel fans of any age giddy.

If you’re looking to say hello to your favourite superheroes, you’ll find them roaming around at all hours of the day. Flag them down and they’ll be happy to take a pic! You can also book a special character dinner at Cafe 4, which provides a more intimate setting to interact and chat with your heroes. The character dinner runs from Thursday to Sunday, from 5pm to 7pm. 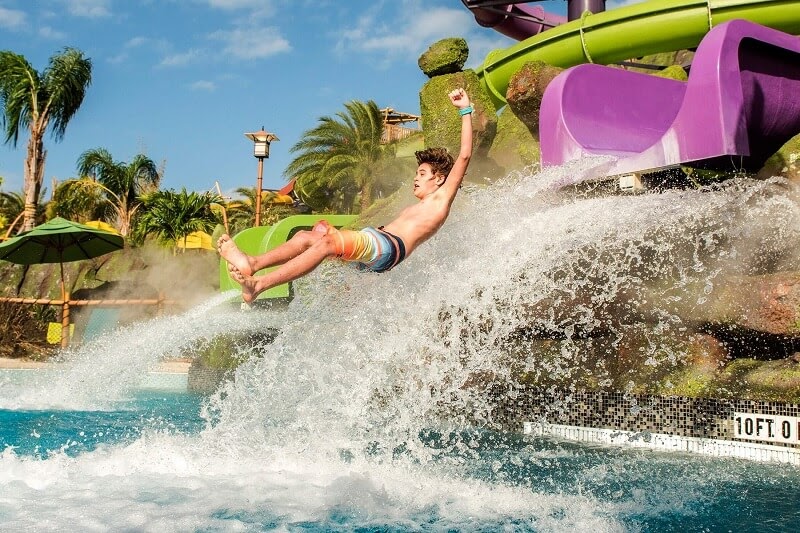 The pick of the bunch are the Ohyah & Ohno Drop Slides, which plunge you down a slaloming tunnel before catapulting you 6 feet above the water. Meanwhile the Puihi round raft rides let the whole family get involved, as you take up a single raft, spin through the darkness, and launch into a zero-gravity drop!

It’s important to know that, despite being largely comprised of thrill rides, there’s plenty of places to relax in Rainforest Village (and Volcano Bay in general). Here you can find Puka Uli Lagoon, a relaxing leisure pool that also caters to young children, with tropical bongo drums and spraying jets of water.

For most people, the teenage years are a chance to break away from the fears and restrictions of being a child – and step into adulthood. This means there’s a whole world of experiences that until now, were just too big and too scary to contemplate. Roller Coasters tend to fit into that category. Thankfully, when it comes to terrifyingly awesome thrill rides that’ll test your teens’ metal, Universal Orlando Resort offers the perfect playground. Here are the most intense, hair-raising rides Universal has to offer: Arguably one of the best roller coasters in all of Orlando, the high speed Incredible Hulk Coaster has struck fear into the hearts of many theme park goers. Featuring a 110ft cobra roll and speeds of up to 67mph, riders experience a massive 4Gs as they are propelled through the twists and turns. But don’t run scared yet! The ride is surprisingly smooth and genuinely lots of fun – in fact we’ve found that the majority of the fear factor comes from the anticipation of the queue. We’ve no doubt that once you’ve tried it once, you’ll be back again for more in no time! Another high-speed coaster, the Hollywood Rip Ride Rockit is all about that punch of adrenaline. Before you’re taken on a vertical incline to its lofty peak (yes, 90 degrees), you get to choose the music that’ll accompany your rock ‘n’ roll descent! The fear is really cranked up as you slowly ascend to the top – but when you finally come shooting down, that rush of adrenaline as you soar along its winding tracks makes it all totally worth it.

Revenge of the Mummy – Universal Studios

Revenge of the Mummy sets the high speed thrills to one side, and instead takes you on a psychological adventure through the dark caves of the undead. With creepy visuals, ominous sound and even the use of fire, you’re truly immersed in the spine-chilling tombs. Despite being less intense than the other rides on this list, Revenge of the Mummy is no walk in the park, and you can still expect some speedy launches and unsuspecting drops. Potentially the scariest of all Universal’s thrill rides, the Ko’okiri body plunge is not for the faint hearted! The concept is simple, you stand at the top of the great Volcano Krakatau, and wait for the trap door to open beneath your feet, sending you on a near vertical (70 degree) drop down into the water. With 125 feet of slide, it’s the tallest body plunge slide in the USA. The slide only caters one person at a time – so it typically has the longest wait time at Volcano Bay. But it’s well worth it and certainly one for the bucket list. CityWalk is a great area of Universal for all ages, with bustling city streets full of shops, restaurants and entertainment. For teens, it provides a great space to hang out with friends (or make new ones!). It’s a slice of independence that a lot of teenagers yearn for, giving them a few hours away from their parents.

Top Tips for Families with Teens

With the rides and attractions out of the way, we’ve put together some additional tips to help you make your trip extra special. These are applicable for all travellers, but they’ll be especially important if you’re bringing teenagers along with you!

Hook Up to the Free Wi-Fi

There is free Wi-Fi coverage throughout all the Universal Parks, so there’s no need to waste your precious data. As soon as you’re through security you can sign up with your email address and get access to the glory of the internet.

Portable Chargers Are Your Best Friend

The last thing you want is a sulking teen who can’t Snapchat their friends. Universal offers their own system of battery charging, the Fuel Rod, which is also found at other Orlando theme parks. However, these are $30 to purchase and an additional $3 every time you want to swap out your battery for a fresh one. That’s a deal that makes very little sense when you can buy a perfectly good portable charger for far less, and simply recharge it in your hotel room every night.

If you want to use a traditional charger in the park, there are several power outlets available. However these are not strictly for guest use and you may be asked to remove your charger. Your best bet is almost always a good portable charger. If your teens are online during their trip (which they invariably will be), they’re likely to be documenting every moment on social media. Universal sometimes shares content from visitors on their official pages, so go ahead and tag them on Instagram (@universalorlando) for a chance to be featured. Admittedly, Universal are a bit picky with what they share, so you’ll probably have better luck with us at FloridaTix! Tag us on Twitter or Instagram  (@floridatix) and we’ll give you a nice ol’ shoutout.

Unlike in the UK, the drinking age in Orlando is 21, meaning no alcohol for the teens!

There are some restricted items that aren’t allowed in the park, including T-shirts. Universal specifically won’t allow any “clothing with offensive language or content”, so if your teens are particularly rebellious, have them tone it down for the duration of your trip! Here is a full list of items that you can’t bring in your backpack:

That’s just about everything you need to know about taking teens to Universal Orlando Resort. Although the planning is always daunting, we promise it’ll be worth it in the end. Looking for more top tips? Join our Destination Florida Facebook group and be part of the discussion.