Choosing your Perfect Wands at Ollivanders in Harry Potter World

What Harry Potter fan doesn’t dream of having their very own wand?

At  The Wizarding World of Harry Potter you’ll be able to visit a real Ollivander’s Wand Shop to choose your perfect wand – or even have a wand choose you!

There are 2 Harry Potter Wand Shops at Universal Orlando – one at Diagon Alley and another at Hogsmeade.

This Harry Potter Wand Buying Guide shows you what types of wand you can choose from….

Designed to bring even more magic to your visit! With an interactive wand you’ll be able to cast spells around different areas in Diagon Alley and see the magic come to life before you!

Levitate a feather quill at Scribbulus, use a Silencing Charm to quiet the maddening song of the Fwooper bird at Magical Menagerie, or light up the lamps and chandeliers at Flimflam’s Lanterns!

Watch the Weasley cast members trying out the interactive wands:

You’ll also be given a map to show where you can use the wand, so you don’t miss any spell-casting opportunities.

We’ve seen these wands in action, and they’re absolute genius!

Due to popular demand, Ollivanders are bringing out a wand that’s specially designed for little ones. These are smaller and lighter than the traditional wands, meaning that smaller children don’t have to miss out on the fun!

Take home an authentic replica of your favourite character’s wand from the Harry Potter films! These wands come in a display box and are perfect as a gift or a souvenir of a magical trip!

There are loads of collectible character wands available, including:

Want something a bit more impressive? Go for one of the special wand collections! Get your magic straight from the main man! This set of 6 authentic replica wands is displayed on a wand rack made from simulated parchment bearing the names of 6 members of Dumbledores Army. It’s double trouble! The Fred and George Weasley replica wands are mounted on a special display base 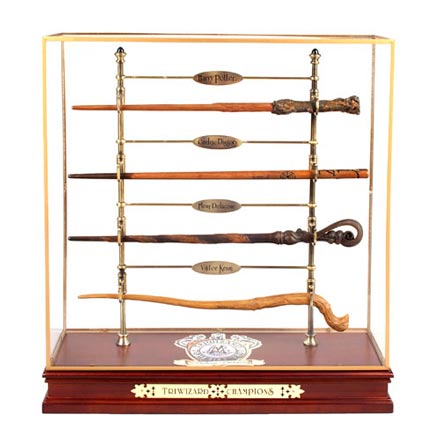 A collection of true champions! The Triwizard collection includes replicas of all the wands belonging to the Triwizard champions (Harry, Krum, Fleur, and Cedric) from Harry Potter and the Goblet of Fire. They come a glass display case so you can show off your wands while keeping them in perfect condition!

The Wand Experience at Ollivander’s

If you’re lucky, you might be one of the privileged few who get to experience first-hand that enchanting moment when a wand chooses a wizard, recreating one of the most iconic scenes from the Harry Potter books and films!

During the wand experience at Ollivanders Wand Shop, a few guests will be given the opportunity to let a wand choose them. As far as we’re aware there’s no foolproof way to make sure you get selected, but those that do get to try out a few magic tricks with various wands until the right wand chooses them!

One thing to bear in mind is that you’re under no obligation to keep the wand, but if you do want to keep it, it must still be paid for.

All wands are available at the Ollivander’s Wand Shops in both Diagon Alley or Hogsmeade Village, at Universal Orlando Resort