Everyone deserves a treat during a day exploring the busy theme parks! Now with the popularity of the Disney Dining Plan (which I’ll refer to here as DDP), the choice of Disney World snacks – both sweet and savoury – is bigger than ever.

There are loads of delicious bites to choose from, but here are my ultimate top 10: This has to be my most favourite Disney snack – It is DELICIOUS! Cinnamon Rolls are available warm (you can even ask for extra frosting!) on the Disney Dining Plan at Gaston’s Tavern in the Magic Kingdom, and with molasses cream cheese from Sassagoula Floatworks at Port Orleans French Quarter. You can also get them at the Boardwalk Bakery and a ‘Colossal’ version at the Kusafiri Cafe in Animal Kingdom.

Tip: There’s a colossal Mickey-shaped Cinnamon Roll on the menu at Creature Comforts in Animal Kingdom! This oh-so-good delicacy is available (with cinnamon sugar) on the DDP at Sleepy Hollow Treats in the Magic Kingdom and the Oasis Canteen in Hollywood Studios. You can also buy them in kiosks in the American Adventure in EPCOT and on the Boardwalk. Just don’t watch them making it – then you won’t know how many calories are in it!

You’ll find these at The Lunching Pad in Tomorrowland, Magic Kingdom.

Best. Cookie. EVER! Head straight to The Trolley Car Cafe (Starbucks) in Hollywood Studios and it will be the best money (or snack credit) you ever spend. Cool creamy pineapple ice-cream – soooo refreshing on a sweltering day. Grab one from Aloha Isle in Magic Kingdom, Tamu Tamu in Animal Kingdom (which also has alcoholic versions) and Pineapple Lanai at the Polynesian Resort. The regular types are snack credits on the Disney Dining Plan.

A surprisingly filling savoury treat, with both pork or veggie options at the wagon in Adventureland in Magic Kingdom or just meat from the Yak and Yeti Local Food Cafe in Animal Kingdom. A great snack credit. 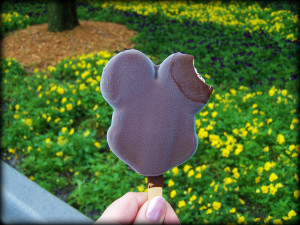 Whether it be the Premium Ice-cream Bar or the Ice-cream Sandwich, both of these Mouse shaped treats are scrumptious and readily available in the parks at the carts and kiosks. Both are on the DDP. Just try to eat them before they melt … A cardamon bun, with vanilla custard and toasted coconut??? Hold me back! If you haven’t ventured to the Kringla Bakeri in Norway in EPCOT, shame on you!! (and while you’re there, grab me some cinnamon loaf please). Any kind of cupcake looks and tastes good in my opinion, but at Disney World they’re extra-special! My favourites are the limited edition seasonal ones – like the pumpkin Halloween delicacy. There are many variations to try but here are a few of the best places to try: Cinnamon flavoured donutty goodness…. YUM. You’ll be drawn in by their amazing smell at the cart in Frontierland and as a dessert at Pecos Bill in the Magic Kingdom, and Dino Bites in Animal Kingdom.

You can also get “Churritos” from La Catina de San Angle in Mexico, EPCOT. Even more exciting (to me anyway) is the introduction of the awesomely sounding Vanilla Ice Cream Churro Sandwich which is available from Sleepy Hollow in the Magic Kingdom. YUMMY!!!

All of these are available on the Disney Dining Plan.

What’s the best snack you’ve had Walt Disney World? Let us know what they’re like and where to find them!

Janine has been to Florida 8 times in the last 12 years and is a self-confessed Disney World addict! She has an 8-year-old daughter who is one of the “Unofficial Guide to Walt Disney World” kids. Janine loves to write and has contributed to several Disney-inspired blogs. Follow her on Facebook and Instagram
Google+ Twitter
Tagged in:  Disney dining,disney world food,disney world snacks,Walt disney world