Universal Orlando Resort’s fourth theme park, Universal’s Epic Universe is expected to open in 2023! Follow this page for the latest information and rumours on the park’s attractions, opening date and more.

Latest Update: 01/08/19 – The park will officially be called Universal’s Epic Universe. The news was revealed in a press conference at the Orange County Convention centre, just southwest of the 750-acre lot where the park will be built.

All the information below is official. All aboard the hype train!

As predicted by many, the new park will be called Universal’s Epic Universe. Not ‘Fantastic Worlds’ or ‘Legendary Lands’ as we initially thought. In a teaser for the announcement, Universal promised us something epic, and the new park will live up to expectations – by name at the very least!

Thanks to the official concept art above, we have a great idea of what the park will look like. It’s a sprawling design, with several clearly defined ‘worlds’ that sprout out from its central walkways. A surprise to some will be the amount of water that seems to be present, which already gives the park something of a fantastical and otherworldly feel.

According to an official statement from Universal: “Universal’s Epic Universe will take guests on a journey where beloved stories expand into vibrant lands – and where that journey is as much a part of their adventure as the ultimate destination.” Epic Universe will be located within a larger 750-acre site that nearly doubles the size of Universal’s presence in Central Florida. The park will be just a few miles from the existing resort in Southwest Orange County, which hosts Universal Studios, Islands of Adventure and Volcano Bay. Specifically, it will be south of Sand Lake Road and east of Universal Boulevard.

The graphic below shows the location and scale of Epic Universe in relation to other Orlando attractions, including ICON Orlando and Fun Spot: 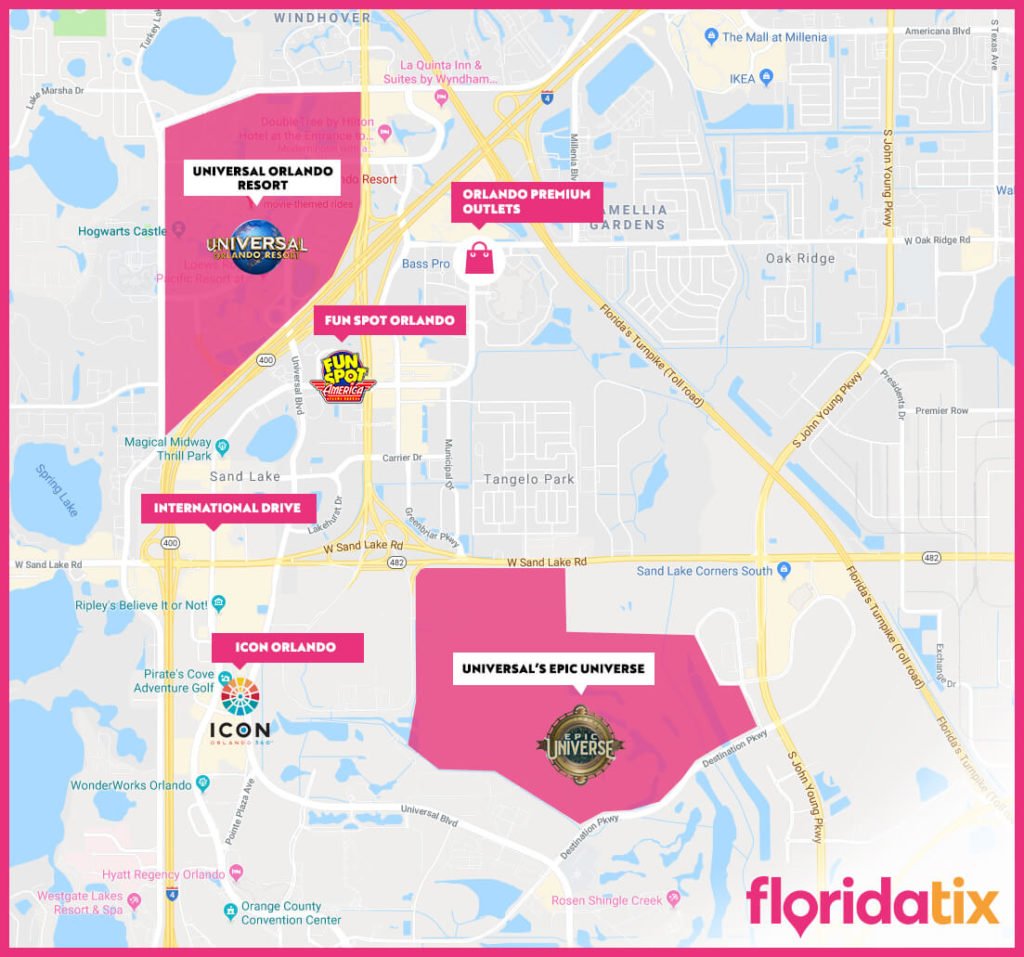 The stretch of land that Epic Universe will occupy has a long history with Universal. The land was originally purchased by the company in the 90’s to house Epic Universe, but was later sold due to various financial, commercial and corporate reasons.

With hype for the new park exploding, there’s no doubt Universal will release more information about Epic Universe in the coming days and weeks. We’ll be updating the information on this page as soon as it becomes official, so you can stay up-to-date by following our Destination Florida Facebook Group.

Unsurprisingly, it’s been impossible to keep Epic Universe rumours and leaks down. So, unlike the information above, none of this is official or confirmed. The latest leaks and rumours are as follows:

What lands will be in Epic Universe?

It’s heavily rumoured that the centrepiece of the new park will be Super Nintendo World. Nintendo’s IP had already been confirmed for the Orlando Resort, but we now think it’s home will be at Epic Universe. The land will include a family-friendly Yoshi’s Adventure ride, Donkey Kong Mine Cart Madness roller coaster and a high-tech indoor Mario Kart experience. Guests will also be invited to use a wearable wristband called a Power Up Band, alongside a smartphone app. Watch this space, and get ready to throw some real-life shells!

The Wizarding World franchise will supposedly extend its Universal reach, with a land based around the Fantastic Beasts and Where to Find Them series.

Several beloved Dreamworks franchises will probably feature in a dedicated land too, including How to Train Your Dragon, Shrek, Madagascar and Kung Fu Panda.

It’s likely that Universal’s Classic Monsters will find a substantial home in the park, with the iconic Dracula’s castle as its focal point. But the highlight of the land is rumoured to be a next-generation ride that will bring together all of the monsters in one terrifying experience. Universal’s Epic Universe will take guests on a journey where beloved stories expand into vibrant lands – and where that journey is as much a part of their adventure as the ultimate destination.

The new theme park will also feature an entertainment center, hotels, shops, restaurants and more. It will be located within a larger 750-acre site that nearly doubles Universal’s total available acreage in Central Florida. Universal’s Epic Universe is just a few miles from the existing resort in Southwest Orange County. Specifically, it will be south of Sand Lake Road and east of Universal Boulevard.

“Our vision for Epic Universe is historic,” said Tom Williams, Chairman and Chief Executive Officer for Universal Parks & Resorts. “It will build on everything we have done and become the most immersive and innovative theme park we have ever created. It is an investment in our business, our industry, our team members and our community.”

“The investment Universal is making in our community and the benefit all of us will see is substantial,” said Mayor Demings. “This will benefit nearly every segment of our economy – from tourism to high-tech.”

Mayor Demings also spotlighted Universal’s role in the Kirkman Road extension. This is a 50/50 public-private partnership in which Universal is investing $160 million to extend Kirkman into the area where the new park will be located.

“The Kirkman extension will improve transportation through a busy and growing portion of our county and open up the entire area for additional development – including an important expansion of our Convention Center,” he said.

During the announcement, Governor DeSantis, Mayor Demings and Tom Williams released information about Universal’s economic contribution to the state and local economy.

Universal Orlando currently employees 25,000 people and will hire an additional 14,000 team members as part of Epic Universe, including professional, technical, culinary and other specialised positions. The company currently contributes more than $302 million in annual state and local taxes – a number that will nearly double when the new theme park opens.

The majority of the businesses Universal relies on are either regional firms or national firms with a large regional presence. An economic impact study for Universal conducted by UCF Economic Professor Sean Snaith found that Universal Orlando’s combined direct and indirect economic benefit to the Florida economy since Universal Studios opened in 1990 is $73 billion. He also found that construction of the new park alone will contribute a total of $11.5 billion in direct and indirect economic benefit into the Florida economy.