What not to miss at Disney’s Hollywood Studios

On our most recent trip to Florida we spent a day at Walt Disney World’s Hollywood Studios. I had never visited this park before on previous visits so I was excited to see what it had to offer! 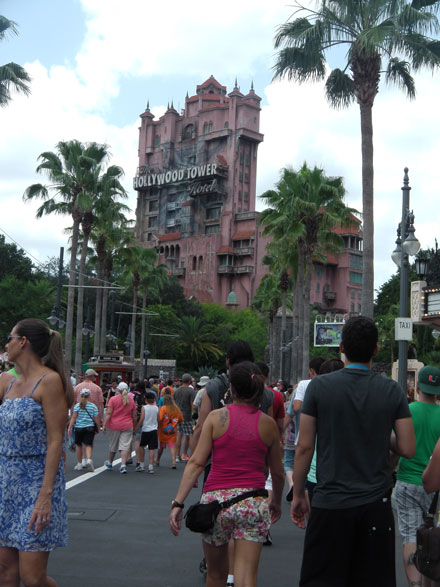 Predominantly based on film and TV, Disney’s Hollywood Studios has some fantastic shows, tours and rides for Disney fans all ages, so here are some of the attractions I’d most recommend:

The Top Rides to use your FASTPASS on

One thing I’d definitely recommend is to make a beeline for rides that require a FASTPASS as soon as you enter the park. Toy Story Midway Mania is such a popular ride and Fastpasses can run out so quickly – many people miss out on this ride completely because of the ridiculously long queues. The ride itself is one for all the family to join in, shooting targets and collecting points as you spin around in a cart in a glowing Toy Story land. Just make sure you’re not a sore loser! Another ride that I’d definitely recommend for you thrill seekers is the Rock n Roller Coaster (Starring Aerosmith). This was by far my favourite ride in the whole park. A fast indoor rollercoaster in the dark with the odd flash of neon signs on the track, whilst an Aerosmith song is blasting in your ears from your seat. It definitely gives you that adrenaline rush you might have been craving! Again, a very popular ride though so be mindful about when you go, and make sure to make the most of that Fastpass!

Hollywood Studios also has a few more ‘gentle’ rides that give you a few minutes to relax without being spun around or shot through the air! The Studio Back Lot Tour is a good one for all the family; it allows you to learn about how special effects are created in movies as well as experiencing them for yourselves. You’ll also be able to feast your eyes on a few iconic items that have been featured in well-known movies. Hollywood Studios offers a few different shows, and two that I would definitely recommend to add variety to your day are the Indiana Jones Stunt Show and Lights, Motor, Action!. These both sound like they’re more geared towards the boys, but I got totally sucked in by the special effects and stunts, and it left me feeling amazed with how much effort and attention to detail these shows contain. I’m so glad I took time out to watch these.

Restaurant wise, we ate at 50s Prime Time Cafe, which I’d recommend 100%! It’s set in a vintage American style diner and the waitresses are really interactive and play a part as their job. The restaurant has rules; no elbows on tables (and trust me, you’ll get told off if you get caught!).

You’ll receive a sticker for clearing your plate, and any young children who are extra good may get sprinkled with ‘fairy dust’ (which is actually glitter). I thought the special touches in here really made our experience fun and memorable. Not to mention the food which was all home-cooked and yummy! I’d definitely return here!

Overall, Disney’s Hollywood Studios is a fab theme park and one that would definitely be on my list to re-visit!

About the author: Kate Daniel

Kate Daniel is a lifestyle and travel blogger with a passion for travelling and seeing the world, blogging about her adventures along the way in the form of experiences of theme parks and restaurant reviews! Come find her at her blog aworldfullofprettiness.blogspot.com.